Lake Forest, CA – July 5, 2017 – Cryptozoic Entertainment, leading creator of board games, trading cards, and collectibles, and Boat Rocker Brands, the merchandise and licensing arm of Boat Rocker Media, today announced the release of both Orphan Black Trading Cards Season 2 and Orphan Black Trading Cards Season 3 Premium Packs exclusively at San Diego Comic-Con. Cryptozoic will launch a pre-sale on at 10 a.m. on July 6 of limited quantities of both the Season 2 and Season 3 trading card sets, allowing fans to purchase Premium Packs prior to San Diego Comic-Con and then pick them up at the event.

The premium trading card sets are based on the hit TV series Orphan Black, which airs on BBC AMERICA and Space, and feature a heavy dose of signatures from fan-favorite cast members. Tatiana Maslany, who won an Emmy® for Outstanding Lead Actress as the star of the show, has signed cards of seven clones she played in Season 2, and six clones she played in Season 3. In addition to Maslany, fans can find autographs from Ari Millen (who plays Mark Rollins, Styles Miller, Rudy, Parsons, and Seth), Evelyne Brochu (Delphine Cormier), and Jordan Gavaris (Felix Dawkins), among many others.

Each four-card Premium Pack includes three Autograph Cards and one Cryptomium Chase Card. Some of the Autograph Cards are special Autograph/Wardrobe Cards, that include both a cast member’s autograph and an actual piece of clothing worn on the series.

Every case contains 12 Premium Packs and is guaranteed to contain three Autograph Cards signed by Maslany. As these are special limited sets, there will only be 720 packs/60 cases available total for each set.

Season 2 of Orphan Black hits the ground running with Sarah in a desperate race to find her missing daughter Kira. Her scorched earth tactics spark a war with pro-clone Rachel, dividing and imperiling everyone she loves. With Alison’s carefully crafted suburban world spinning out of control, and the genetic illness affecting Cosima threatening them all, Sarah must negotiate a dangerous world of new enemies and shifting allegiances to get to the bottom of the experiment that made them who they are. In Season 3, Sarah faces off with a new breed of militaristic male clones in order to unearth the Leda sisters’ origins, and in the process, find the key that may ultimately save the sisters’ lives. 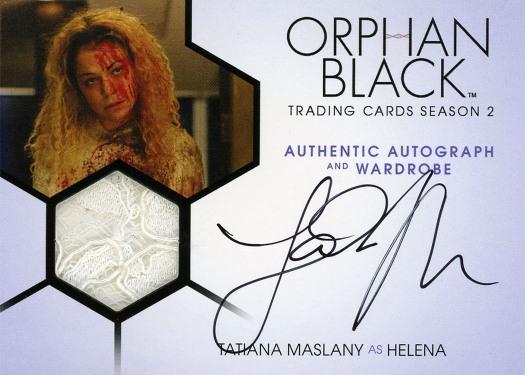 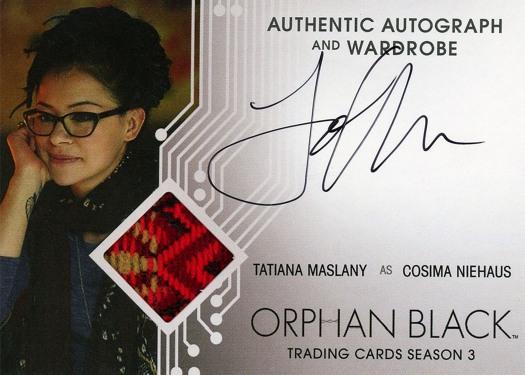 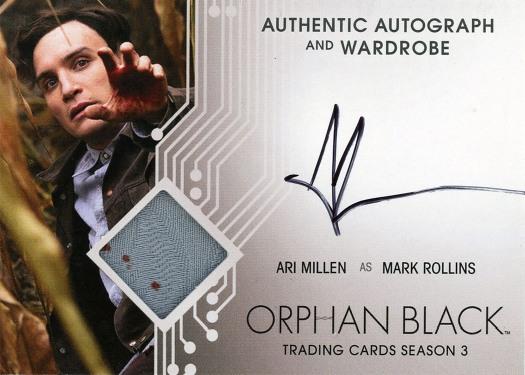 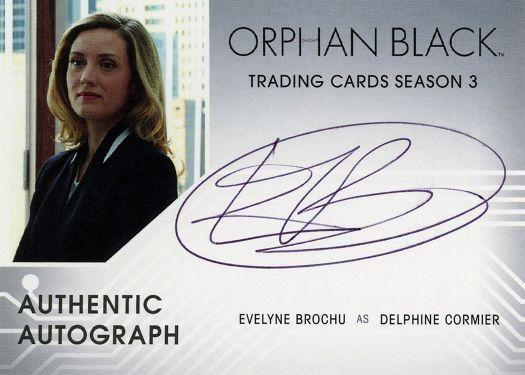 About Cryptozoic
Since 2010, Cryptozoic Entertainment has been dedicated to the concept of “Fans First,” striving to develop the most creative and sought-after products for pop culture enthusiasts worldwide. As an entertainment company with a diverse portfolio of licensed and original IPs, its catalog covers a broad spectrum of tabletop games and collectibles. The passionate team at Cryptozoic aims to inspire gamers and collectors all around the globe, while bringing fans together as part of the Cryptozoic community. Visit www.cryptozoic.com for more information about product releases, events, and news.

About Space
Space is home to phenomenal programming including imaginative dramas, epic movies, engaging reality series, and the daily entertainment talk show INNERSPACE, the source for all-things genre, and the popular after show AFTER THE BLACK. Named “Channel of the Year” in 2013 by Playback Magazine, Space is also home to original series ORPHAN BLACK and KILLJOYS, and the exclusive Canadian home for signature series DOCTOR WHO, THE EXPANSE, DARK MATTER, and the upcoming AFTERMATH. Space content is always available at Space.ca, and on Facebook, @SpaceChannel, and other social media platforms. Space is part of Bell Media, which is owned by BCE Inc. (TSX, NYSE: BCE), Canada’s largest communications company.

About BBC AMERICA
Created in 1998, BBC AMERICA is a hub of innovative, culturally contagious programming like the ground-breaking unscripted series Top Gear, the top-rated science-fiction phenomenon Doctor Who, and the fan-favorite Orphan Black. The influential network has been the launch pad for talent including Ricky Gervais, Gordon Ramsay, and Graham Norton — all adopted as American pop culture icons. A joint venture between BBC Worldwide (the commercial arm of the BBC) and AMC Networks, BBC AMERICA has attracted both critical acclaim and major awards including four Emmy® Awards, five Golden Globes® and 12 Peabody Awards. The irrepressible network has garnered one of cable’s most curious, educated and affluent audiences, with many properties boasting super-fan levels of engagement. Available on cable and satellite TV, BBC AMERICA broadcasts in both standard and high-definition, is available On Demand across all major digital platforms and offers full episodes online at bbcamerica.com. Find out more by visiting press.bbcamerica.com or follow us on twitter.com/bbcamerica.

Shahriar has been working as a writer and editor for Cryptozoic since 2014. When not berating people about incorrect usage of commas, he enjoys staring at walls, eating fruit, and telling toddlers he's taller than them. He also likes superheroes, comic books, TV shows, and Alfred Hitchcock movies. In his free time, you can usually find him hanging out with his wife Laura, enacting some sort of mischief together.

Epic Spell Wars™ of the Battle Wizards: Hijinx at Hell High
Back To Top
© 2020 Cryptozoic Entertainment. All Rights Reserved.